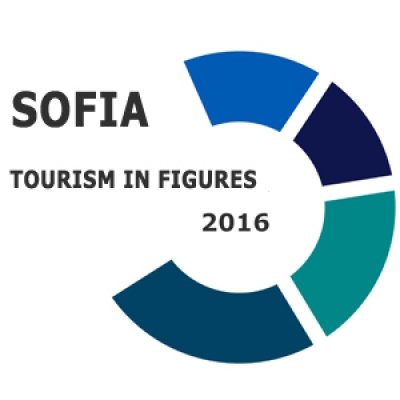 Sofia Tourism Administration presents to you the sixth edition of the tourist reference book Sofia – Tourism in Figures. The edition presents information regarding the state of the tourism industry in 2016. Sofia continues to establish itself on the world tourist map as a successful tourist destination. This is evident from its increasing popularity, which leads to an annual increase in the number of tourists. Following the strong growth in 2015, Sofia continues to have an impressive, double-digit growth of tourists and their overnight stays in 2016 – 13% and 14% respectively.

The continuous growth of tourists and their overnight stays in the last few years has not gone unnoticed. This is the reason because of which in 2016 our capital was ranked among the top 10 European destinations with the largest increase in the number of tourists for the period 2009-2016 - over 7% annually, along with Barcelona, Budapest and Berlin. This is what the MasterCard Global Destination Cities Index shows.

An important reason for the increasing popularity of Sofia is also the launching of 23 new routes at Sofia Airport in 2016 - thus, the total number of served destinations in 2016 was over 70. Sofia is becoming more and more accessible thanks to the low-cost airlines, which are quickly establishing themselves on the market.

Following the world trends in tourism, Sofia continues to invest in the development of its tourist facilities, taking into consideration the sustainable development of the city. In 2016, funds were invested in the reconstruction and renovation of parks and green areas, and of Sofia Zoo, in the exhibition of cultural heritage, in enriching the cultural calendar and last but not least – in the modernization of public transport. All efforts are paying off, turning our capital into a more welcoming and attractive tourist destination.

High-quality service and affordable prices contribute to tourists’ satisfaction and a desire for a second visit.