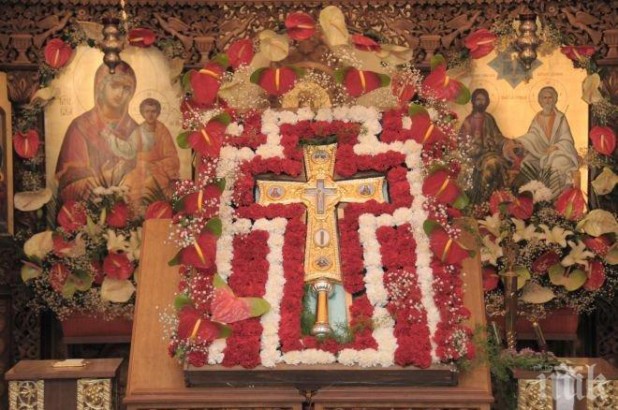 On September 14, the Orthodox Church celebrates the Universal Exaltation of the Precious and Life-Giving Cross, also called Holy Cross Day. There are four different Feasts of the Cross in Orthodox Christianity– on the 3rd Sunday of the Great Lent (the Veneration of the Cross), on Good Friday, on August 1 and on September 14. Traditionally, the priests sprinkle the houses with holy water and thus bless them. According to church legend, Saint Helena, the mother of Emperor Constantine the Great, was a zealous Christian. She set off to the holy places in Palestine to look for the grave of the Lord, which was destroyed by the persecutors of Christians two centuries earlier. Her efforts were successful. The cave of the grave and three crosses were found. It was discovered which of them was the Cross of Christ when a recently deceased person was resurrected by being touched with one of them. Elena sent part of this life-giving cross to her son in Constantinople while the cross itself was put in the main Jerusalem church.

This feast is associated with the end of the summer and the beginning of the autumn agriculture season. From Holy Cross Day or Simeonov den (Simeon’s Day - September 1) the sowing of winter crops can begin. On Holy Cross Day, the seeds for sowing are blessed. In some regions the feast is called “Grape-harvest Day” because the harvest of grapes begins. Community gatherings, family and personal church services, and corban (a sacrificial offering) for wellness are organized.